MCS was designed from the outset to deliver a secure web service solution, out of the box, with no reliance on any additional external applications or system services. 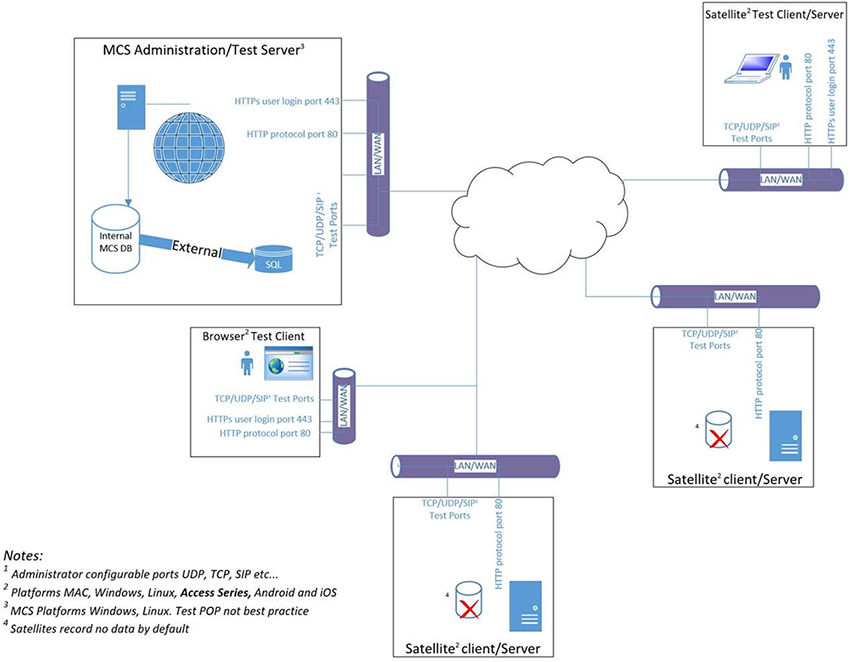 This approach enabled the MCS solution to deliver an integrated web and data services architecture, such as browser access anywhere/everywhere, while removing threats associated with support of server scripting, binary execution, fraudulent URLs and other operating system threats exposed through access to OS data layer assets. Penetration attacks that are so common to commercial web-server applications cannot impact MCS because of its secure web framework.

The MCS satellite architecture extends MCS testing services across any size of global/cloud network. Delegating testing services (client or server roles) to MCS satellite applications, allows the MCS solution to adopt the same integrated web architecture benefits afforded to MCS. This approach allows the MCS management application to reside in a private (client or server) and secure network domain, independent of and isolated from the higher threat of public domain deployments.

The MCS Satellite architecture was designed to deliver a cost-efficient secure software and hardware solution. The MCS Access Series hardware satellite was uniquely designed to deliver MCS compatible server/client testing services, embedded on a single solid-state platform, devoid of any commercial operating system. Eliminating the operating system layer, and with it, the additional threat layers such as, file system, executable binaries, scripts, utilities , sensitive system data and memory assets, delivers a testing platform that is safe from the significant threats that target and virally spread directly from commercial OS platforms. The Embedded satellite design allows MCS Access Series satellites (server and client) to be deployed safely in the public domain without the costly security infrastructure mandated for such deployments.

Viral data threats that spread through file penetration attacks are eliminated as part of the satellite security architecture. The Satellite data management engine has no requirement for an underlying file system, therefore all data assets solicited from MCS by any satellite (hardware or software) operates strictly as a one-way street. All files delivered to a satellite, regardless of platform, can never be accessed, retrieved or returned to its source via the OS. Independent OS penetration threats and other application threats that share the commercial platform with the MCS satellite will obviously still exist.

Much like a video streaming service, such as Netflix, VoIP also utilizes buffering to ensure smooth communication. As everyone knows, if the buffer runs out of data the service will fail.

High peaks and discards are events that drain the Jitter buffer, causing the quality of the call to deteriorate rapidly. Just reporting average Jitter won't provide insights into any threats to the jitter buffer.

To understand equilibrium consider this...

The taxi carrying the family of eight has a problem and can only travel at half the maximum speed of the road and arrives at the airport in two hours, so they miss the flight.

Any test that does not strictly control and understand the precise payload that is being measured can never report an accurate result.